Patriotic Degree of the Knights of Columbus 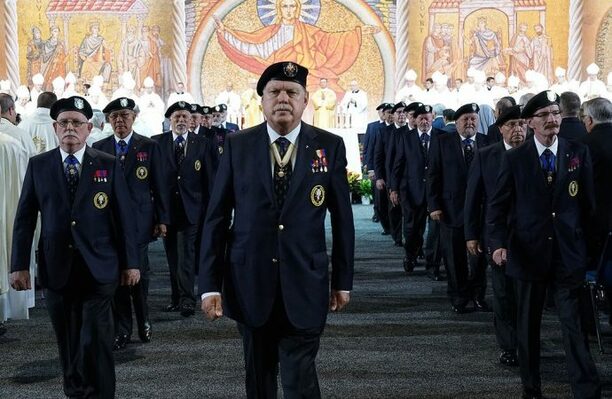 Another degree open to members in the Knights of Columbus is the Fourth Degree. The first exemplification of that degree was held in New York City, on February 22, 1900. The ritual added patriotism to the three principles of the Order: charity, unity and fraternity. Any Third Degree member in good standing, one year after the anniversary of his First Degree, is eligible for membership in the Fourth Degree.

Our local Assembly meets at 123 West Pine Street Georgetown, DE 19947, the Georgetown Library  on the third Monday of every month. Membership in our Assembly comes from councils located in the lower portion of the state which includes five councils in our district.

Members of the Fourth Degree can serve as honor guards at religious and civic functions, an activity that has brought worldwide recognition to the Knights of Columbus.

The Purpose of the Color Corps

In those days when knighthood was in flower, the Knights of old carried the sword to defend God, Church, Country and fellow man according to the code of chivalry. In our times, Sir Knights wear regalia and carry the sword to honor Christ and His Apostles, especially on the religious and civic occasions.

A NEW UNIFORM, THE SAME MISSION
At the opening Mass of the 135th Supreme Convention in St. Louis, the Order’s vice supreme masters processed wearing the new uniform of the Fourth Degree: a blue blazer, blue tie and a black beret — all with the Fourth Degree emblem — worn with a white shirt and dark gray slacks
Supreme Knight Carl A. Anderson officially announced the change in his annual report that afternoon
Weeks earlier, the Knights of Columbus Board of Directors unanimously voted to adopt the new uniform for the Fourth Degree. The decision was made with the good of the entire Order in mind and was based on the following factors: Understandably, some members may prefer the old regalia, but the supreme master and vice supreme masters urge all Fourth Degree members to put the good and unity of the Order before personal preference.
Likewise, during the convention, the Good of the Order Committee stated: “We commend all of the faithful Sir Knights who have proudly worn the Fourth Degree regalia, bringing much respect to the Order. With the new Fourth Degree uniform, recently approved by the Board of Directors, this honor and respect associated with Sir Knights will remain, and it will open the door more widely for a new generation to join their ranks. In a spirit of unity, let us assist with a smooth transition to this new uniform and encourage it to be worn with great dignity and pride.”
Below are frequently asked questions that have arisen concerning this change.

Will the new uniform allow the use of ceremonial swords?
A: Yes. Ceremonial swords will continue to be part of the Fourth Degree. When swords are used, gloves should also be worn (see picture to the right).
How will rank be distinguished?
A: Colored patches will be worn on the beret behind the Fourth Degree emblem as follows: Those not holding office (who formerly wore red capes) will wear berets with no patch.
Where can I buy the new uniform?
A: The uniform can be purchased at knightsgear.com or by calling 1-855-GEAR-KOC (855-432-7562).
Is the Order making money on the new uniform?
A: No, the uniform is being sold at (or sometimes below) cost.
What if a member just purchased the old regalia?
A: Any member who purchased the old regalia after May 1, 2017, can submit their receipt along with their member number to regaliacredit@kofc.org. Information will then be sent to that member on how to receive a $200 credit toward the new uniform.
Can the old regalia still be worn?
A: Yes, for a time. While the preference is for the new uniform wherever possible, the old regalia can still be worn until the end of the current fraternal year (June 30, 2018). After that date, only the new uniform should be worn.
Was the new uniform field tested prior to its release?
A: Yes. The new uniform was field tested by Fourth Degree members attending the Warriors to Lourdes pilgrimage.
Who made this decision?
A: The board of directors made this decision earlier this year after a three-year period of testing and discussion. In addition, the change was previously discussed with the vice supreme masters at the Supreme Assembly.
Did members have input on this?
A: For years, supreme officers and directors have received comments from members and prospective members that the old regalia was a barrier either to membership in general or to membership in the Fourth Degree.